How to Increase Vascularity for Roadmap Veins

How to Increase Vascularity for Roadmap Veins

A simple definition of vascularity:

Superficial veins which can be seen spiraling through a person’s muscles.

Superficial veins are located at the surface of the skin, with their physiological function being to cool the body.

When a person’s body temperature rises too high, blood is transferred from deep veins to the superficial veins. This prevents the internal organs from overheating.

High levels of vascularity is coveted by bodybuilders, due to visible veins making a physique look ‘more ripped’ and ‘freakish’. This can give the illusion of increased muscularity and decreased body fat.

This vascular look is particularly of interest to bodybuilders during the summer months, when they’ve been cutting and want to reveal as much muscle definition and vascularity as possible. Vascularity is considered the ‘icing on the cake’ for a bodybuilder.

Genetics play a significant role in how vascular a person is. Specifically, how much collagen the body produces will affect the thickness of the skin.

Collagen is a protein that is responsible for increasing skin elasticity, located in the dermis, making it less prone to wrinkling. It also plays a role in rejuvenating dead skin cells.

If a person produces high levels of collagen, they will naturally have thick skin. As a result they’ll have more layers of skin (epidermis) covering/hiding superficial veins.

Equally, if a person has decreased collagen synthesis, this will result in thinner skin.

Thin skin is often considered an undesirable characteristic in men and women, due to it being the consequence of ageing. However, one benefit to less elastic skin is increased vascularity.

The less subcutaneous fat a bodybuilder has, the more vascular they will be. Usually in order to see noticeable levels of vascularity, a bodybuilder will need to be less than 10% body fat. However, 7% or less is optimal.

Thus bodybuilders in the off season are typically less vascular, as they are following high calorie diets, known as a bulking phase.

Note: men at higher body fat percentages can still be vascular, however it is less likely. This is due to excess body fat increasing the distance from where the veins are situated, to the surface of the skin; due to additional fat stores.

For women, they will need to be less than 20% body fat for enhanced vascularity, and ideally 17% or lower.

When dieting, losing just a few percentages of body fat, can have a considerable impact on vascularity. For example, a bodybuilder may cut from 20% to 10% and not notice any improvements. However, a further reduction from 10% to 7% may result in a bodybuilder’s cephalic vein being visible (for example). 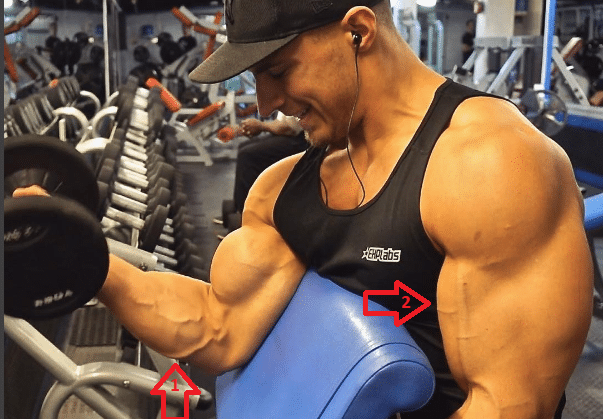 If someone is very lean, it doesn’t guarantee that they will have exceptional vascularity. Collagen synthesis is arguably a more important factor when determining this sensation. This is why you can have people with very low levels of body fat, yet their skin still appears to be thick.

Enhanced blood flow can cause an increase in vascularity, hence the popularity of vasodilator supplements in bodybuilding.

A good example of this principle in action is when a man has an erection. Whilst erect, the superifical dorsal vein can often be seen. However, when flaccid, this vein moves away from the surface of the skin and is no longer visible.

This extra blood flow can explain why bodybuilders are more vascular during a workout. Whilst lifting weights, blood often fills the working muscles, resulting in a pump/increased vascularity.

Furthermore, a bodybuilder may become increasingly vascular during the summer months, due to a person’s body’s temperature rising. Consequently blood rushes to the surface of the skin. This is the body’s own defence mechanism in action, ensuring the internal organs don’t overheat.

Equally when it’s cold, blood rushes inwards, in an attempt to keep the vital organs as warm as possible.

This is why it is very difficult for a bodybuilder to be vascular when they’re cold, or shivering.

One bodybuilder who understood this principle came up with a method to increase his body temperature before stepping out on stage. He would blow hot air onto his muscles from a hair dryer, instead of ‘pumping up’. His methodology was effective, with his veins rising to the surface of his skin within seconds.

You can watch the the video here:

Another bodybuilder put this concept to the test, where it was effective again (see below).

This hair dryer method certainly gives evidence that increased blood flow (to the surface of the skin) can significantly increase vascularity, albeit for a limited period of time.

Higher levels of nitric oxide (N.O) are thus desirable for vascularity. N.O is a molecule that causes blood vessels to dilate, and thus increases blood flow to the muscles.

Research has shown certain foods to be effective at increasing N.O production, thus adopting a diet rich in the following foods may enhance vascularity:

Studies have shown beetroot juice to increase N.O production by 21% in just 45 minutes (3).

30 grams of dark chocolate daily has shown to cause significant increases in N.O. (4).

Aged garlic extract can increase N.O levels by as much as 40%, 1 hour after administration (5).

In one study, those who consumed spinach had salivary nitrate rise by 8x (6).

The vitamin C content in citrus fruits is found to have a positive effect on N.O levels (7)

Pomegranates also can increase N.O, due to their strong antioxidant profile (8).

L-arginine has proven to increase N.O production. Nuts and seeds are rich in this amino acid (9).

Red wine increases nitric oxide synthase, the enzyme which is crucial for higher N.O levels (10). However, regular consumption of alcohol isn’t recommended for bodybuilders. due to cortisol increasing. However, red wine may be effective pre-contest due to its vasodilation and diuretic properties.

Supplements, such as l-arginine, are also taken by bodybuilders to enhance blood flow to the muscles, with users typically timing their dosages pre-workout.

Another way to increase the body’s core temperature is by stimulating thermogenesis.

This is the process which increases the body’s core temperature, thus shifting blood away from your internal organs and to the surface of your skin. The following foods may be able to stimulate this effect:

Thus a bodybuilder could add low-sugar peanut butter sandwiches (on wholemeal bread) to their diet plan, eat a gingerbread man post-workout, sprinkle cayenne pepper on his next steak, or drink green tea before workouts. All of these when done regularly will increase thermogensis, boosting your metabolism and perhaps having a mild effect on vascularity.

If none of these diet tweaks appeal to you, you can always take cayenne pepper, green tea or ginger root in supplement form which may also prove effective.

For your muscles to function, they need nutrients.

Muscles obtain nutrients via your blood stream. Thus if your muscles grow, they will require further nutrients.

A higher demand for nutrients requires more blood flow, so it is theorized that: a more muscular bodybuilder will be more vascular.

There aren’t any studies or data to back this up, and so it is merely a theory.

However, this could be another reason why steroid-users have more prominent veins than natural bodybuilders (on average), because they will have more muscle mass on average.

If there is a significant amount of water that collects in between your muscle and skin (extracellular retention), then this can obscure your veins. This type of water retention can also reduce muscle definition.

Alternatively, if there is water retention inside the muscle cell (intracellular) your muscles will inflate. This is the type of water retention that is desirable for vascularity.

When bodybuilders prepare for a contest, they typically carb deplete to eliminate glycogen (energy stores) inside the muscle cell.

By carb depleting, bodybuilders will flush out extracellular and intracellular fluid.

After fully depleting they may see an increase in vascularity, due to a reduction in fluid outside the muscle cell. Equally, their muscles will shrink temporarily due to a loss of intracellular fluid.

However, when the bodybuilders carbs up again, because their muscles are craving glycogen, an influx in carbohydrates will result in more water being retained inside the muscle cell.

Thus a bodybuilders muscles will be inflating with glycogen, combined with very little water collecting outside of their muscles.

For every 1 gram of carbohydrate consumed, the body will retain an additional 3 grams of water (15).

Therefore, if a bodybuilder wanted to look extra vascular for a certain day, following this protocol may prove to be effective. A general guide would be:

Carb deplete for a few days by eating <30g carbs per day.

Then the day before you want an increase in vascularity, carb load with high G.I (glycemic index) foods – eating 2.5g of carbohydrates per lb of bodyweight.

Then on the actual day, carbohydrates should remain high.

If carbohydrates/calories go too high during this period, there is a chance the person can ‘spill over’, meaning some water might be distributed outside of the muscle cell. Not eating more than 2.5g of carbs per lb of body weight (when carbing up) will prevent the chances of this happening.

Some bodybuilders can become vascular when drinking alcohol. This is due to ethanol being a diuretic, thus eliminating extracellular water retention. This is why some bodybuilders drink red wine the night before a competition, to make them appear more ‘dry’.

Here’s a picture of me when I was around 7% body fat during a workout. This was the day after drinking a considerable amount of alcohol.

I rarely ever drink alcohol and it’s even more rare for veins to appear through my arms (even when I’m very lean). Thus these were some freaky veins, and is further evidence that alcohol has a positive effect on vascularity.

This is a defence mechanism by the body to stop it from retaining too much water.

For increased vascularity (in the short term):

There are several ways for a bodybuilder to increase vascularity, with some methods having a profound effect, and others only mild.

Just by focusing on these two factors, a bodybuilder will almost certainly see an increase in vascularity (no matter what their genetics are).

Excluding genetics, losing body fat is possibly the number 1 factor for increasing vascularity. This is something that almost everyone can control, by adopting a calorie deficit diet.