The History of Calorie Counting

The History of Calorie Counting

Ah yes the much-maligned calorie. Whether you’ve ever tried to lose weight, put on mass or even just feel okay about eating junk food, chances are you’ve come across those pesky calorie numbers on food labels. You may be surprised to learn that despite the ubiquity of calorie counting in today’s society, this unit of measurement is a relatively recent phenomenon and the idea of counting calories for health purposes is even newer.

Who Invented the Calorie?

Although some state that Favre and Silbermann first coined the term calorie in 1852, recent works into the calorie’s origins tell a different story. Between 1819 and 1824, it is said that French physicist and chemist Nicholas Clément introduced the term calories in lectures on heat engines to his Parisian students. His new word, ‘Calorie’, proved popular and by 1845, the word appeared in Bescherelle’s Dictionnaire National.

By the 1860s the term had entered the English language following translations of Adolphe Ganot’s French physics text, which defined a Calorie as the heat needed to raise the temperature of 1 kg of water from 0 to 1°C. By the 1880s, the term was first introduced to the American public by Edward Atkinson in 1886. Professor Wilbur O. Atwater came next when he published on the calorie in 1887 in Century Magazine and again in the 1890s in Farmer’s Bulletin.

Atwater is in many ways the driving force behind the calorie’s popularity. From the 1890s, Atwater and his team at Wesleyan undertook an exhaustive study into the caloric content of over 500 foods with the intent of producing a scientific and healthy way of maintaining one’s weight. By the early 1900s, Atwater was one of the leading authorities on dietary intake and his advice was simple. Cut out excess and ensure a balance between foods.

Unless care is exercised in selecting food, a diet may result which is one-sided or badly balanced that is, one in which either protein or fuel ingredients (carbohydrate and fat) are provided in excess…. The evils of overeating may not be felt at once, but sooner or later they are sure to appear perhaps in an excessive amount of fatty tissue, perhaps in general debility, perhaps in actual disease. 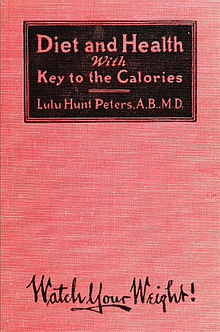 While Atkinson and Atwater were advocating for dietary restrictions based on calorie contents, it took some time before the idea of calorie counting became a mainstay in American diets. In 1918, American physician, author and philanthropist, Lulu Hunt Peters changed the face of dieting for the next century. Seeking to write a diet book targeted towards American women, Peters latched onto the idea that calorie counting was an effective means of enacting healthy weight loss. With this idea in mind, Peters got to work.

For years Peters had written a number of newspaper columns for the Central Press Association entitled ‘Diet and Health’, which dealt with issues of health and weight. Proving popular with her audience, namely middle-aged American women, Peters was encouraged to collect her writings into one neat volume, something she did in 1918.

Under the title Diet & Health: With Key to the Calories, Peters published her first and only book on calorie counting. Fortunately for Peters, one book was all she needed. Diet & Health became one of the first ‘modern’ dieting book to become a bestseller, and it remained in the top ten non-fiction bestselling books from 1922 to 1926.

So what made Peters’ book so attractive? Well a number of things…

Interestingly for athletes and bodybuilders, Peters advice on gaining and losing weight will seem very familiar. To calculate your basic caloric needs, she recommended multiplying your bodyweight by 15-20 to find the magic number. If you needed to lose weight eat 200-1000 calories less and to gain weight eat 200-1000 calories more. Fun facts, aside, Peters was undoubtedly hugely influential in popularising calorie counting for the general public. A trend that began in the late 1910s and continues to this very day.

When, how and why did Bodybuilders take up Calorie Counting? 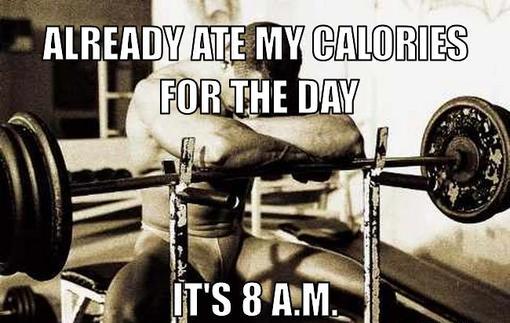 Given that calorie counting became a recognized means of dieting from the 1910s, it’s remarkable to think that Bodybuilders took to it so late.

Go ahead, read the dietary advice of men like Eugen Sandow or George Hackenschmidt and you’ll find no mention of calories. What you will find is a strong emphasis on eating natural, unprocessed foods. Fast forward even to the likes of Reg Park and John Grimek and the advice stays the same. To build muscle you were encouraged to eat more, and to lean out, eat less and perform more volume in your workouts.

Heck even Arnold, Zane and co appeared to function without the need for counting calories. Ric Drasin has routinely discussed the ketogenic diets favoured by ‘Golden Age’ bodybuilders, suggesting that the elite bodybuilders of the 1970s took a drastically different approach to food than today’s lot.

Despite this, there is some evidence of calorie counting creeping in during this time. As part of his participation in Arthur Jones’ infamous ‘Colorado Experiment’, Casey Viator consumed 800 calories a day to bring himself down to an emaciated 168lbs. During the 28 day experiment, he upped his caloric intake to roughly 5,000 calories a day. Something which may explain his alleged 45 pound weight gain in 28 days. By the 1979 Olympia, Mike Mentzer, another Jones’ disciple was using calorie counting to manipulate his physique. As an interesting side note, the following Mentzer quote is often taken to justify an anything goes If It Fits Your Macros Approach. 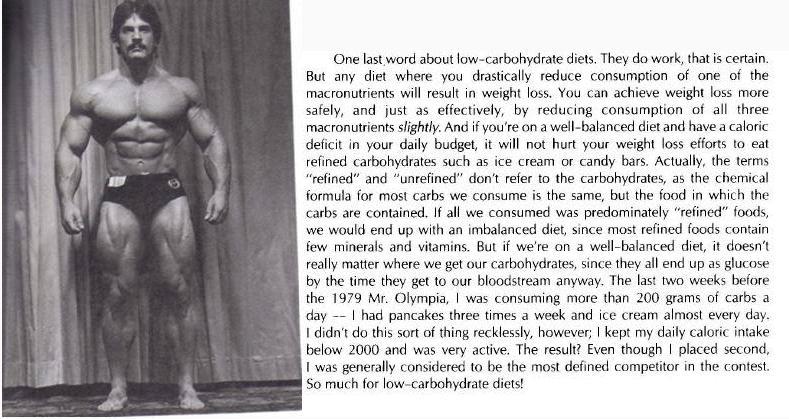 While bodybuilders were tentatively experimenting with calorie counting during the 1970s, the practice truly came to the fore in the 1980s when Rich Gaspari and Lee Labrada utilized the practice to produce some truly stellar physiques. In 1988, Rich Gaspari revealed to the makers of Battle for The Gold, a bodybuilding documentary now available on Youtube, that he calculated his caloric intake to the tee, weighing everything and generally eating an incredibly strict diet. 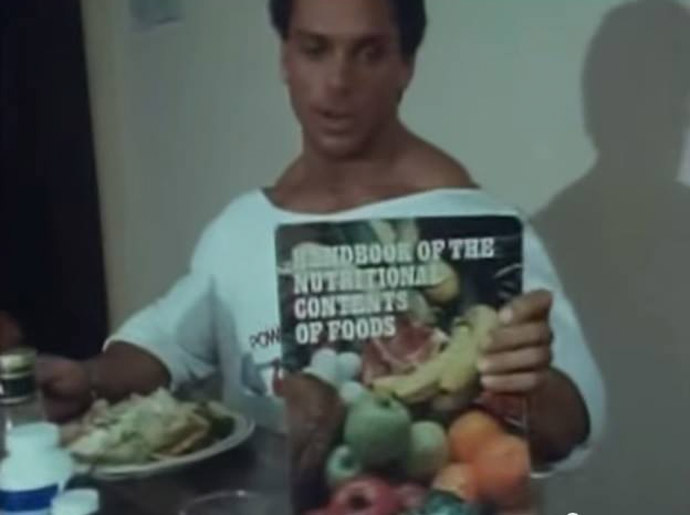 Gaspari with his nutritional ‘bible’

By then Gaspari had clearly demonstrated the efficacy of his approach. In many ways, Gaspari’s calorie counting changed the face of bodybuilding. You see, at the 1986 IFBB Pro World contests, Gaspari revealed his striated glutes to the judges and audience, setting a new standard for leanness that has continued to this very day. 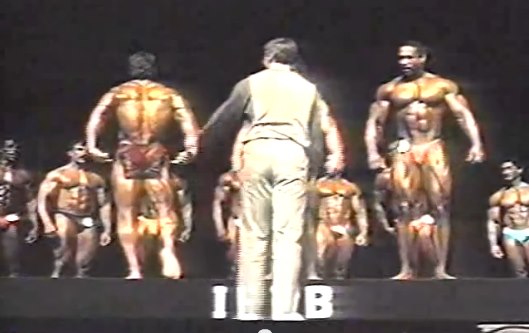 Gaspari’s Glutes in all their Glory

Since then bodybuilders, both natural and enhanced, have taken to calorie counting to achieve a similar level of leanness. While the practice of counting calories is wrought with problems, it remains perhaps the most effective way of reducing one’s bodyfat to the levels needed for competitive bodybuilding.