Cardarine (GW-501516): Dosage, Side Effects & Before and After Pictures

Cardarine (GW-501516): Dosage, Side Effects & Before and After Pictures

Disclaimer: The following article is for educational purposes only and NOT to promote the use of illegal substances. If you have any questions or concerns, Dr. Touliatos is currently available for consultations.

Cardarine (GW501516) is a PPARD (Peroxisome Proliferator Activated Receptor Delta) receptor agonist. However, it is often referred to as a ‘SARM‘, due to its similar anabolic and fat burning effects.

Cardarine was recently formulated in 1992 and thus is classed as a ‘research compound’, similar to SARMs, with its effects not yet fully known and unapproved by the FDA.

However, early research has demonstrated cardarine’s positive effects on body composition and athletic performance, causing it to be banned in sports. The World Anti-Doping Agency (WADA) has added cardarine to its list of prohibited substances, placing it in the category of: ‘hormones and metabolic modulators’.

The FDA is yet to approve cardarine, due to safety concerns regarding its carcinogenic effects.

Thus, it is illegal to purchase cardarine with the intention of using it on yourself to improve body composition.

However, it is legal to purchase cardarine for research purposes i.e. administering it to your rat and observing its effects.

This causes a decrease in both subcutaneous and visceral fat mass in users, producing a leaner and more defined appearance.

Decreases in visceral fat are desirable for users wanting to maintain a small waist; with high levels of visceral fat causing a protruding look to the stomach.

Cardarine’s lipolytic effects are similar to certain SARMs used for cutting, such as ostarine.

Cardarine’s positive effects on insulin and blood glucose may result in it being a potential treatment for type II diabetes in the future.

There is evidence of cardarine having a simultaneous anabolic effect, with a phase II study observing an increase in lean mass by 1.3kg in users (1), following a dosage of 10mg/day for 12 weeks.

This modest increase in muscularity is similar to SARMs, thus having a positive effect, albeit with much less potency compared to anabolic steroids.

Cardarine has a dramatic effect on muscular endurance, due to the remodeling of muscle tissue via mitochondrial biogenesis. Researchers found that cardarine converts more fast twitch fibers into slow twitch (2), making users less vulnerable to fatigue during exercise.

Slow twitch fibers are more efficient at utilizing oxygen, due to the presence of mitochondria; enabling superior levels of ATP production (energy) inside the muscle cells.

A study on mice found cardarine to increase endurance by 68% in just 3 weeks (3).

Cardarine’s effects of muscular endurance are quite remarkable, which will also (indirectly) help to burn more fat stores, when combined with regular cardiovascular training (due to increased calorie burn).

The majority of cardarine’s endurance-boosting results are temporary and will subside when a cycle finishes. However, users are likely to experience superior endurance post-cardarine administration, due to muscle memory (the heart is a muscle).

The amount of endurance retained from a cardarine cycle will depend on whether the user continues endurance training post-cycle.

This may be of use to bodybuilders or fitness models who require full muscle bellies on-stage, and are prone to glycogen depletion following calorie restrictive diets.

Increases in vascularity may also occur, due to decreased levels of extracellular fluid.

Cardarine has shown to have cardioprotective properties, with it having a significant effect on HDL cholesterol (the good type that you want high).

This is a very unique benefit, compared to SARMs and anabolic steroids, which can cause negative cholesterol fluctuations.

In the previous phase II cited study, HDL levels increased by 17%, with LDL cholesterol decreasing by 7% with a 10mg/day dosage.

Thus, stacking cardarine with SARMs or anabolic steroids may not only further enhance body composition and performance; but also reduce cardiac risk.

Cardarine’s ability to improve cholesterol, may result in it being a potential treatment for dyslipidemia in the future.

Does Not Suppress Testosterone

Anabolic steroids and SARMs decrease endogenous testosterone levels, caused by overstimulation of the androgen receptor. However, PPARD agonists do not affect the HPT (hypothalamic-pituitary-testicular) axis, thus testosterone levels will remain stable on cardarine — with no PCT required.

No Virilization in Women

Cardarine is a suitable compound for women to take, in terms of inhibiting masculine side effects. Thus, if females are interested in taking anabolic steroids or SARMs, with the main intention of losing subcutaneous fat; cardarine may be more optimal in regards to retaining feminine characteristics.

This is due to cardarine not affecting hormones, specifically testosterone, and thus preventing: hair loss, clitoral enlargement, breast reduction and a deepened voice box.

Although cardarine does not cause masculinization effects in women, does not mean it is safe for them to take — with it remaining a research chemical. In contrast, anavar is FDA approved in medicine, with women and children tolerating this steroid well in trials.

Anavar has a low incidence of virilization in women when taken in conservative dosages/cycles. Thus, anavar can be considered a safer compound for promoting significant fat loss (vs cardarine), due to its effects being well-known and studied over a longer period of time.

In 2009, cardarine was withdrawn from further development, after it produced cancer in all tested dosages; following long-term preclinical safety trials (4).

Such trials have been criticized in the fitness community, due to excessive dosages and duration of use. However, the lowest dosage given to rodents was 5mg/kg per day (translated as 65mg/day for an 80kg human), also proved to be cancer-causing.

However, a 2 year cardarine cycle as conducted in the research surely is excessive, compared to the average gym-goer typically using cardarine for 8 weeks.

Note: These tests are standard for safety evaluations, with approved medications passing such requirements.

In phase I and phase II human studies, cardarine demonstrated insignificant fluctuations in ALT and AST liver enzymes at dosages up to 10mg/day.

However, Dr. Thomas O’Connor has treated patients who have used cardarine and consequently has likened its hepatotoxicity to the equivalent of taking 50mg/day of anavar (a mega dose).

The reason for conflicting results in research and anecdotal data may be attributed to cardarine causing cellular proliferation. Thus, it stimulates cell growth and division — increasing overall cell count. This is perfectly acceptable in a healthy person, but in the case of someone with an existing hepatic injury; cardarine may accelerate the death of liver cells.

As cardarine is often taken by individuals who have also taken SARMs or/and anabolic steroids — this may explain such hepatic complications, as users are often combining cardarine with other hepatotoxic compounds.

Note: Anti depressants and alcohol consumption may also be a dangerous combination with cardarine.

Thus, if any of our readers are thinking about trying cardarine, we advise to get your liver enzymes tested, to better understand the condition of this organ before any potential cellular proliferation occurs.

Some cardarine-users report insomnia, indicating a stimulating effect on the central nervous system (CNS) and an increase in adrenaline output.

Users may be able to avoid this side effect by taking their dose earlier in the day (preferably in the morning), thus leaving generous amounts of time for the CNS to regulate before sleep.

Although the CNS may become more aroused, this effect is not believed to be excessive. Thus, cardarine does not replicate the jittery effects of more notorious, thermogenic fat burners, such as clenbuterol. Instead, energy levels on cardarine remain stable (preventing any crashes), whilst also increasing overall well-being in users.

Cardarine Results: Before and After Pictures 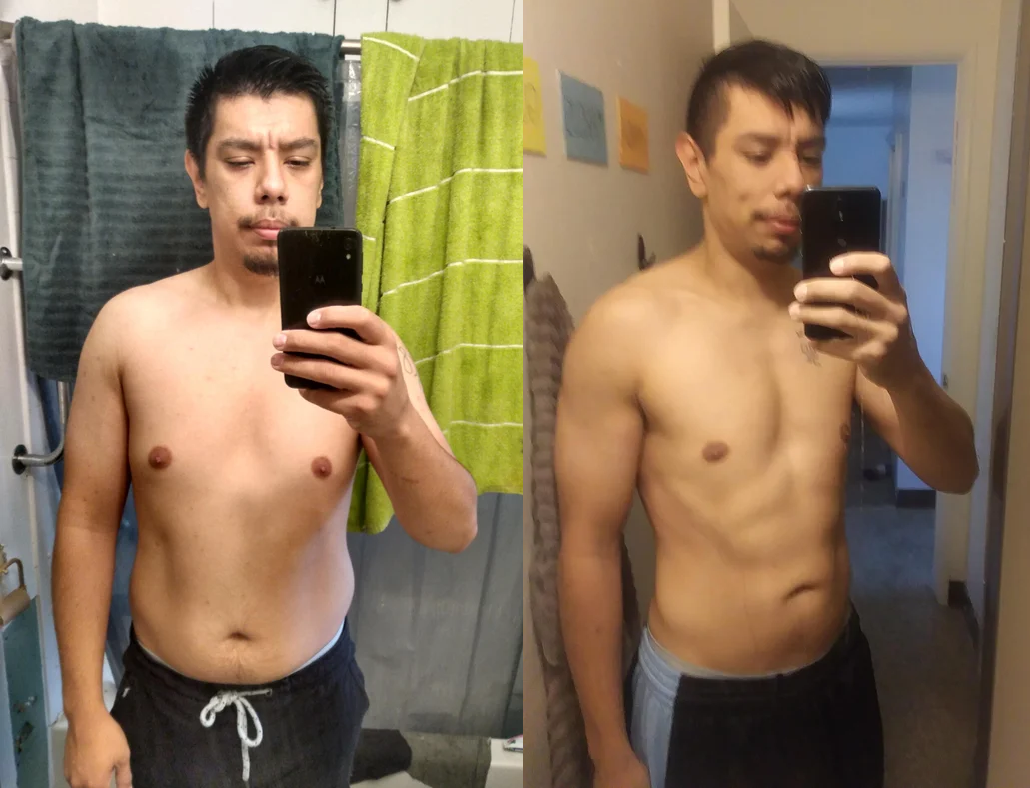 He lost 40lbs in weight, going from 205lbs to 165lbs and reducing his body fat percentage by approximately 10%.

Cardarine Before and After #2 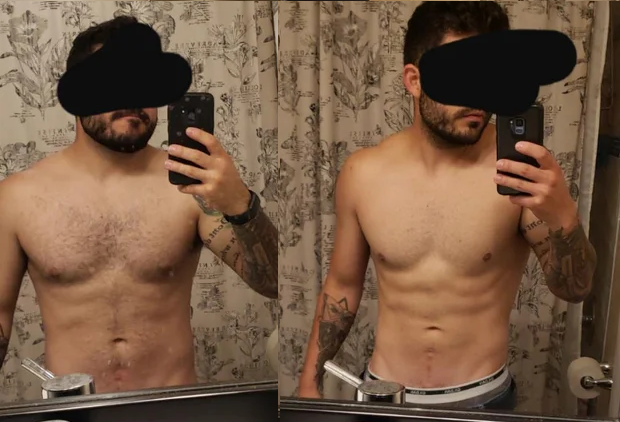 These before and after pictures are following a 4 week cardarine cycle, with this user administering 10mg/day.

This man’s results prove that exceptional fat loss is possible, even on a relatively low dosage and short cycle.

He lost 20lbs and reduced his body fat percentage by approximately 5%.

As cardarine (GW501516) has not been approved by the FDA for medicinal purposes, there are no established dosage guidelines. However, in studies, researchers administered up to 10mg/day in participants.

Users taking cardarine today for cosmetic purposes typically take 10-20mg/day. This is taken once per day and approximately 30 minutes before workouts, to encourage fat oxidation during exercise.

Lower dosages (10mg/day) and short cycles (4 weeks) can still provide exceptional results, as documented in the second before and after transformation.

Note: The higher the dosage/longer the cycle, the greater risk there will be for developing cancer.

Cardarine is commonly cycled by itself, however it can also be stacked with ostarine (MK-2866) for enhanced fat loss.

A typical cardarine and ostarine cycle will look as follows:

Ostarine is considered a cutting SARM, due to its fat burning effects being more prominent than its ability to add lean muscle.

However, ostarine has shown to deteriorate HDL cholesterol levels, suppress testosterone and increase liver toxicity. Thus, a wider range of side effects will occur with the addition of this SARM, as opposed to cycling cardarine alone.

Is it a Good Idea to Stack Cardarine?

Due to cardarine’s cellular proliferation ability, it may not be safe to stack it with hepatotoxic compounds — such as SARMs or oral anabolic steroids.

Doing so, may exacerbate their adverse effects on the liver, further elevating ALT/AST enzymes and increasing the risk of liver failure.

Short, one-off cycles may present low risk, however due to a lack of medical research concerning such stacking protocols, it may be wise to avoid such.

How to Take Cardarine

Like SARMs, cardarine often comes as a liquid solution (20mg/mL), or in tablet form (10mg).

Users can use a syringe to measure out liquid cardarine, before placing it in the mouth to swallow.

Users may take it sublingually for greater absorption, by letting it sit underneath the tongue for 10-15 seconds before swallowing. This method allows for it to come into contact with the mucus membrane, allowing a more direct route into the bloodstream (and thus greater biological availability).

Organizing your workouts earlier in the day may be a wise move on cardarine, due to its stimulating nature. Thus, taking it before your workout, preferably in the morning, will give your central nervous system ample time to wind down before bedtime.

What is the Half Life of Cardarine?

Should Cardarine Be Taken on an Empty Stomach?

Taking cardarine on an empty stomach does not alter its biological availability, thus users can take it with or without food.

Cardarine (GW501516) is a potent fat burning compound, however its effects on muscular strength and hypertrophy are minimal.

Cardarine’s ability to enhance muscular endurance is extraordinary, however it is a prohibited substance by WADA, thus using athletes run the risk of failing a drugs test.

Cardarine remains a research chemical and is unlikely to receive FDA approval, due to various dosages causing cancer.

The main reason people buy cardarine today is to burn fat and improve their body composition. These two objectives can be achieved naturally with a diligent exercise and diet plan.

Thus, potentially increasing your risk of various cancers by taking this compound could be deemed unnecessary. Eating in a small calorie deficit will produce similar fat burning/muscle retaining effects, however it may take a little longer to reach the same end result.