BPC 157 is a peptide consisting of 15 amino acids and is naturally occurring in human gastric juice. Thus, BPC 157 possesses GI protective properties, including alleviation from ulcers, bowel issues, or Crohn’s disease. There is much promise for BPC 157 in medicine as a potent systemic healing agent, when injected or taken orally.

BPC 157 has been described as a ‘miracle agent’, due to its Wolverine-like healing capabilities.

BPC 157 has very positive effects on the muscles, tendons, CNS (central nervous system) and inflammation. It also has a profound impact on wound healing and tissue damage, commonly caused by corticosteroid use.

With BPC 157 being an anabolic peptide, it may also stimulate subcutaneous fat loss, whilst synergistically increasing muscle hypertrophy and strength.

BPC 157 provides significant pain relief, due to it increasing dopamine and serotonin in the brain. Scar tissue may also reduce (especially when applied directly to the area), due it accelerating the body’s healing factor.

As a consequence of to ‘reward system’ neurotransmitters being elevated, BPC 157 can provide antidepressant effects in users. Brain fog and clarity of thought may also improve due to this cognitive shift.

There is limited research conducted on BPC 157, however, thus far there appear to be no noteworthy side effects associated with this peptide.

There are anecdotal reports of users taking BPC 157 for years, without any known side effects (1).

I’ve used bpc157 for a few years. I inject subcutaneously once a day, maybe morning and night if I’m really messed up for a week. I’ve had tendon problems in my neck for ten years. This not only helped that a lot but it seems to just help fix everything injured. There have been no perceivable side effects whatsoever. IMO it is a very effective peptide and has vastly improved my life. Hope this helps.

However, there are several factors to be aware of. BPC 157 is a growth agent, thus, it will cause tissue proliferation like growth hormone. Thus, if someone has cancer, taking BPC 157 in theory could exacerbate their condition. Thus, cancer patients should not take this peptide.

BPC 157 may have a reductive effect on blood pressure, thus, individuals on blood pressure medication should be careful of their BP dropping to very low levels; which may cause dizziness or fainting if not monitored.

Unlike other GH-boosting compounds, BPC 157 is not believed to increase blood sugar levels, thus inhibiting any potential rises in blood pressure.

Anecdotally, BPC 157 currently does not appear to pose any toxicity to the liver, kidneys or heart.

BPC 157 may affect mood post-cycle, as serotonin and dopamine levels spike on-cycle. It is unknown if these return to baseline levels or become suppressed temporarily. However, with BPC 157 being a peptide, it is reasonable to believe neurotransmitter levels will regulate back to normal shortly after cycle cessation.

BPC 157 may cause mild headaches in certain individuals.

An official therapeutic dosage is yet to be established for BPC 157 via a medical authority, as it is not currently FDA-approved.

BPC 157 is cycled by some users (like steroids), or taken continuously by others for several years. We need more research to conclude the absolute safety of this peptide long-term. However, several users have reported no adverse effects when doing so.

Does BPC 157 Help With Erectile Dysfunction?

Some users report an instant erection upon taking BPC 157, which may be attributed to a surge in dopamine levels. Dopamine induces oxytocinergic neurons in the PVN (paraventricular nucleus), thus higher levels may increase sexual function in men.

Other men with injuries to the penis (such as tissue damage of venous leaks) may also benefit from BPC 157, due to its repair/rejuvenation properties on a cellular level. Some users have also reported improvements in libido when taking BPC 157 (a consequence of higher dopamine levels).

I used it Doc. I’m someone who has worked out for 25 years and 40 years old. Used 250iu (250mcg) injected locally daily for two months for surgery I had for right lateral epicondylitis of my elbow. I noticed faster healing, less pain, increased sex drive (over time) and my IBS magically got better for the next 4 months after using it. My blood pressure lowered 10 points on the top and a few on the bottom # (did feel a little sleepy and low/dizzy at times) My blood work months later showed no changes to my liver or kidneys. Hope this helps.

Intramuscular injections are the most optimal way to administer BPC 157 for injuries and isolated pain. However, if injections are not preferable, taking BPC 157 orally (swallowing the liquid) is still effective in healing and repair.

If BPC 17 is being utilized for its gastroprotective properties, oral consumption is suitable.

TB-500 is another peptide that can also be utilized as a healing agent. TB-500 essentially is a synthetic version of Thymosin Beta 4, a protein in the thymus gland.

Both of these peptides are similar in potency, in regards to healing bones, joints and connective tissue.

However, TB-500 may be the superior peptide for promoting ancillary strength and muscle development.

BPC 157 is thought to be the more optimal compound for gastrointestinal issues, due to it being extracted from this area.

Both peptides can be taken simultaneously for even greater results, as they have different, yet complementary mechanisms for stimulating healing.

TB-500 works systemically and thus does not need to be administered at a specific target. BPC 157 however has localized healing effects, and thus it is advantageous to inject near the injured area.

TB-500 can be utilized in dosages of 10-20mg per week. It should be administered 1-2 times per week, for peak efficacy.

BPC 157 is legal to purchase in most countries (including US, Canada and UK) for research purposes. This includes administering it in animals and observing its effects. However, it is not supposed to be used by humans due to a lack of FDA approval.

As of January 1st, 2022, WADA officially added BPC 157 as a prohibited substance (2). Thus, athletes will need to check their respective sporting bodies to see if they will be tested for BPC 157 in the off-season as a means to heal quicker from injuries. 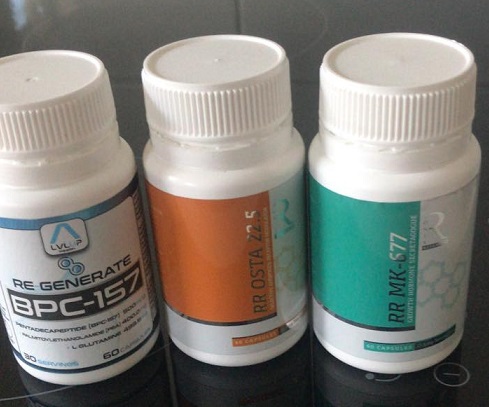 BPC 157 appears to display many positive benefits, in terms of healing and rejuvenation; combined with few side effects.

Although anecdotal reports deem BPC 157 to be a peptide with few adverse interactions, more research is needed in order for the FDA to confirm this.