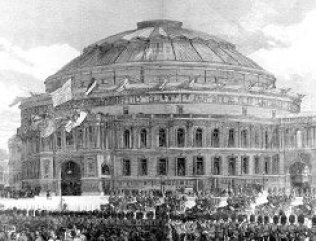 Perhaps unsurprisingly, it was Eugen Sandow, the man many credit as the Father of Modern Bodybuilding, who helped initiate the first ever bodybuilding competition in the Royal Albert Hall in 1901. Billed as ‘the Great Competition’, the show helped kickstart the bodybuilding craze and bring about a world of Mr. Americas, Universes and Olympias. 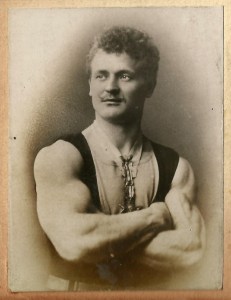 Eugen Sandow, the most famous physical culturist of the time, organised the event

The Great Competition was not created overnight. In fact it was three years in the making.

As early as July 1898, Sandow would write in his own physical culture magazine about an upcoming physique competition in the UK. The then 31 year old Sandow was keen to spread the physical culture message even further across the UK and “afford encouragement to those who are anxious to perfect their physiques.” 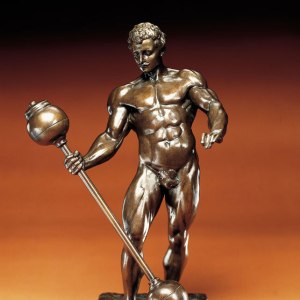 The statues themselves were inspired by a Statuette given to Sandow by William Pomeroy in 1891 during Sandow’s music hall days. Over the years Sandow had commissioned several copies of the Statuette in bronze and spelter. It seemed only fitting that such copies would make up the trophies.

Separating the Wheat from the Chaff

The 1890s were perhaps the height of Sandow’s popularity in the United Kingdom and in light of this, his announcement that he was holding a physique competition was met with great enthusiasm. Soon the Prussian was inundated with applications from aspiring muscle men across England. Knowing that it would be impossible to have every applicant compete at the same time, Sandow and his business partners initiated a series of local Bodybuilding shows across Great Britain.

It was a bold move. Bodybuilding shows had never been attempted to such a scale and there was no guarantee of success. In the interest of fairness, Sandow spent three years attending each of the regional competitions, awarding gold, silver and bronze medals to those with the best physiques. A regional win would allow competitors to compete in the Grand Competition in 1901.

What did Sandow look for in a physique?

Sandow made it clear to both competitors and his fellow judges that prizes would not be awarded to the men with the largest physiques. Instead Sandow devised the following check list based on his own ideals for the perfect physique

On September 14, 1901, men from across England would travel to the Royal Albert Hall in London to compete for the biggest (and indeed only) prize in bodybuilding. The Royal Albert Hall was the biggest arena London had to offer, seating over 15,000. To the delight of Sandow, soon after his announcement it was clear his show would be a sell out. 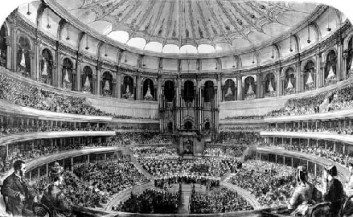 A contemporary depiction of the Royal Albert Hall

Always the astute businessman, Sandow publicly declared that all proceeds from the Great Competition would go to the “Mansion House Transvaal War Relief Fund”, a war fund established for those soldiers fighting in the Second Boer War (1899-1902) in modern day South Africa.

At 8pm on September 14, the Great Competition began with a performance by the Irish Guards in memory of slain US president William McKinley, who had been assassinated just one week prior. The highly emotive performance brought the entire audience to its feet with reporters noting that the large American contingent in the audience that night were “unmistakably touched by the earnest and solemn demeanor of all.”

Once the music stopped, Sandow had the house lights extinguished. Bursting from the darkness came 20 powerful spotlights, illuminating the march of 50 boys from the Watford Orphan Asylum. A display that “aroused the audience to a great pitch of excitement.”

The Great Competition featured everything from wrestling to fencing

After this came athletic displays from wrestling to fencing. Steadfast in his belief that the audience came to be entertained, Sandow left no stone unturned when it came to variety. Despite the audiences’ enthusiasm for such displays it was clear that the spectators were anxious to see the would be bodybuilders. Thankfully soon the time came when 60 competitors strode into the arena to the tune of ‘March of the Athletes’, a composition written by Sandow.

They stood on stage. 60 men in black tights, black jockey belts and leopard skins. The finest muscle England had to offer. Members of the audience looked on in admiration. The following day a journalist present noted “to stand in their ranks was a distinction.” 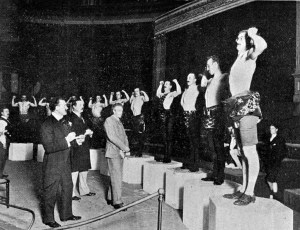 The judges of the night were Sir Charles Lawes, a famous sculptor and amateur athlete and Dr. Arthur Conan Doyle, the creator of the Sherlock Holmes series. In the event of a disagreement between the two guest judges, Sandow would decide the winner. The fact that neither of the men had any great experience in bodybuilding mattered little. Their names gave credibility to the Competition.

Slowly the judges walked towards each contestant, closely examining the sinews of each man. Soon after the group of 60 men was cut to 12 finalists. An intermission was then called to give the judges time to reflect.

When the curtains were raised once more a 34 year old Sandow stood on stage for the day’s last performance. Displaying his remarkable talents, Sandow would tear packs of cards in two, lift weights overhead and dazzle the audience. For five minutes spectators gave Sandow a standing ovation once he had finished and once they were done they Competition neared its end.

With Sandow backstage, the 12 finalists were brought back out. This time each man stood atop a pedestal and were given a set of compulsory poses. Any flaw in their physiques was quickly picked up by the judges. It was written that the host of the night, Eugen Sandow even resorted to going “on his hands and knees to examine the nether limbs of men.”

And the winner is…

Once every competitor had finished their poses, the time came to choose the best developed man in Great Britain and Ireland. 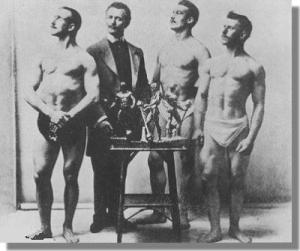 Sandow with the winning contestants

There three men stood before the crowd of 15,000 cheering fans. There was no doubt that the ‘Great Competition’ had been a great success.